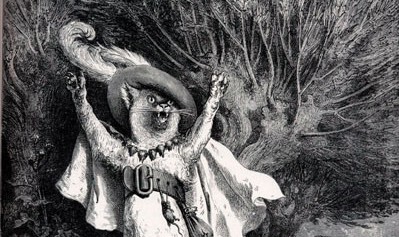 A Miller, dying, divided all his property between his three children. This was a very simple matter, as he had nothing to leave but his mill, his ass, and his cat; so he made no will, and called in no lawyer, who would, probably, have taken a large slice out of these poor possessions. The eldest son took the mill, the second the ass, while the third was obliged to content himself with the cat, at which he grumbled very much. Ã¢â‚¬Å“My brothers,Ã¢â‚¬Â said he, Ã¢â‚¬Å“by putting their property together, may gain an honest livelihood, but there is nothing left for me except to die of hunger; unless, indeed, I were to kill my cat and eat him, and make a coat out of his skin, which would be very scanty clothing.Ã¢â‚¬Â

The cat, who heard the young man talking to himself, sat up on his four paws, and looking at him with a grave and wise air, said, Ã¢â‚¬Å“Master, I think you had better not kill me; I shall be much more useful to you alive.Ã¢â‚¬Â

Ã¢â‚¬Å“You have but to give me a sack, and a pair of boots such as gentlemen wear when they go shooting, and you will find you are not so ill off as you suppose.Ã¢â‚¬Â

Now, though the young miller did not much depend upon the catÃ¢â‚¬â„¢s words, still he thought it rather surprising that a cat should speak at all. And he had before now seen him show so much adroitness and cleverness in catching rats and mice, that it seemed advisable to trust him a little farther, especially as, poor young fellow! he had nobody else to trust.

When the cat got his boots, he drew them on with a grand air, and slinging his sack over his shoulder, and drawing the cords of it round his neck, he marched bravely to a rabbit-warren hard by, with which he was well acquainted. Then, putting some bran and lettuces into his bag, and stretching himself out beside it as if he were dead, he waited till some fine fat young rabbit, ignorant of the wickedness and deceit of the world, should peer into the sack to eat the food that was inside. This happened very shortly, for there are plenty of foolish young rabbits in every warren; and when one of them, who really was a splendid fat fellow, put his head inside, Master Puss drew the cords immediately, and took him and killed him without mercy. Then, very proud of his prey, he marched direct up to the palace, and begged to speak with the king. He was desired to ascend to the apartments of his majesty, where, making a low bow, he said,

Ã¢â‚¬Å“Sire, here is a magnificent rabbit, killed in the warren which belongs to my lord the Marquis of Carabas, and which he has desired me to offer humbly to your majesty.Ã¢â‚¬Â

Another time, Puss went and hid himself and his sack in a wheat-field, and there caught two splendid fat partridges in the same manner as he had done the rabbit. When he presented them to the king, with a similar message as before, his majesty was so pleased that he ordered the cat to be taken down into the kitchen and given something to eat and drink; where, while enjoying himself, the faithful animal did not cease to talk in the most cunning way of the large preserves and abundant game which belonged to my lord the Marquis of Carabas.

One day, hearing that the king was intending to take a drive along the river-side with his daughter, the most beautiful princess in the world, Puss said to his master, Ã¢â‚¬Å“Sir, if you would only follow my advice, your fortune is made.Ã¢â‚¬Â

Ã¢â‚¬Å“It is but little,Ã¢â‚¬Â replied Puss, looking wise, as cats can. Ã¢â‚¬Å“You have only to go and bathe in the river, at a place which I shall show you, and leave all the rest to me. Only remember that you are no longer yourself, but my lord the Marquis of Carabas.Ã¢â‚¬Â

While he was bathing, the king and all the court passed by, and were startled to hear loud cries of Ã¢â‚¬Å“Help, help! my lord the Marquis of Carabas is drowning.Ã¢â‚¬Â The king put his head out of the carriage, and saw nobody but the cat, who had, at different times, brought him so many presents of game; however, he ordered his guards to fly quickly to the succour of my lord the Marquis of Carabas. While they were pulling the unfortunate marquis out of the water, the cat came up, bowing, to the side of the kingÃ¢â‚¬â„¢s carriage, and told a long and pitiful story about some thieves, who, while his master was bathing, had come and carried away all his clothes, so that it would be impossible for him to appear before his majesty and the illustrious princess.

Ã¢â‚¬Å“Oh, we will soon remedy that,Ã¢â‚¬Â answered the king, kindly; and immediately ordered one of the first officers of the household to ride back to the palace with all speed, and bring back the most elegant supply of clothes for the young gentleman, who kept in the background until they arrived. Then, being handsome and well-made, his new clothes became him so well, that he looked as if he had been a marquis all his days, and advanced with an air of respectful ease to offer his thanks to his majesty.

The king received him courteously, and the princess admired him very much. Indeed, so charming did he appear to her, that she hinted to her father to invite him into the carriage with them, which, you may be sure, the young man did not refuse. The cat, delighted at the success of his scheme, went away as fast as he could, and ran so swiftly that he kept a long way ahead of the royal carriage. He went on and on, till he came to some peasants who were mowing in a meadow. Ã¢â‚¬Å“Good people,Ã¢â‚¬Â said he, in a very firm voice, Ã¢â‚¬Å“the king is coming past here shortly, and if you do not say that the field you are mowing belongs to my lord the Marquis of Carabas, you shall all be chopped as small as mince-meat.Ã¢â‚¬Â

So when the king drove by, and asked whose meadow it was where there was such a splendid crop of hay, the mowers all answered, trembling, that it belonged to my lord the Marquis of Carabas.

Ã¢â‚¬Å“You have very fine land, Marquis,Ã¢â‚¬Â said his majesty to the millerÃ¢â‚¬â„¢s son; who bowed, and answered Ã¢â‚¬Å“that it was not a bad meadow, take it altogether.Ã¢â‚¬Â

Then the cat came to a wheat-field, where the reapers were reaping with all their might. He bounded in upon them: Ã¢â‚¬Å“The king is coming past to-day, and if you do not tell him that this wheat belongs to my lord the Marquis of Carabas, I will have you every one chopped as small as mince-meat.Ã¢â‚¬Â The reapers, very much alarmed, did as they were bid, and the king congratulated the Marquis upon possessing such beautiful fields, laden with such an abundant harvest.

They drove onÃ¢â‚¬â€the cat always running before and saying the same thing to everybody he met, that they were to declare the whole country belonged to his master; so that even the king was astonished at the vast estate of my lord the Marquis of Carabas.

But now the cat arrived at a great castle where dwelt an Ogre, to whom belonged all the land through which the royal equipage had been driving. He was a cruel tyrant, and his tenants and servants were terribly afraid of him, which accounted for their being so ready to say whatever they were told to say by the cat, who had taken pains to inform himself of all about the Ogre. So, putting on the boldest face he could assume, Puss marched up to the castle with his boots on, and asked to see the owner of it, saying that he was on his travels, but did not wish to pass so near the castle of such a noble gentleman without paying his respects to him. When the Ogre heard this message, he went to the door, received the cat as civilly as an Ogre can, and begged him to walk in and repose himself.

Ã¢â‚¬Å“Thank you, sir,Ã¢â‚¬Â said the cat; Ã¢â‚¬Å“but first I hope you will satisfy a travellerÃ¢â‚¬â„¢s curiosity. I have heard in far countries of your many remarkable qualities, and especially how you have the power to change yourself into any sort of beast you chooseÃ¢â‚¬â€a lion for instance, or an elephant.Ã¢â‚¬Â

He did so; and the cat was so frightened that he sprang up to the roof of the castle and hid himself in the gutterÃ¢â‚¬â€a proceeding rather inconvenient on account of his boots, which were not exactly fitted to walk with upon tiles. At length, perceiving that the Ogre had resumed his original form, he came down again stealthily, and confessed that he had been very much frightened.

Ã¢â‚¬Å“But, sir,Ã¢â‚¬Â said he, Ã¢â‚¬Å“it may be easy enough for such a big gentleman as you to change himself into a large animal: I do not suppose you can become a small oneÃ¢â‚¬â€a rat or mouse for instance. I have heard that you can; still, for my part, I consider it quite impossible.Ã¢â‚¬Â

Ã¢â‚¬Å“Impossible!Ã¢â‚¬Â cried the other, indignantly. Ã¢â‚¬Å“You shall see!Ã¢â‚¬Â and immediately the cat saw the Ogre no longer, but a little mouse running along on the floor.

This was exactly what he wanted; and he did the very best a cat could do, and the most natural under the circumstancesÃ¢â‚¬â€he sprang upon the mouse and gobbled it up in a trice. So there was an end of the Ogre.

By this time the king had arrived opposite the castle, and was seized with a strong desire to enter it. The cat, hearing the noise of the carriage-wheels, ran forward in a great hurry, and standing at the gate, said in a loud voice, Ã¢â‚¬Å“Welcome, sire, to the castle of my lord the Marquis of Carabas.Ã¢â‚¬Â

Ã¢â‚¬Å“What!Ã¢â‚¬Â cried his majesty, very much surprised, Ã¢â‚¬Å“does the castle also belong to you? Truly, Marquis, you have kept your secret well up to the last minute. I have never seen anything finer than this courtyard and these battlements. Indeed, I have nothing like them in the whole of my dominions.Ã¢â‚¬Â

The Marquis, without speaking, offered his hand to the princess to assist her to descend, and, standing aside that the king might enter firstÃ¢â‚¬â€for he had already acquired all the manners of a courtÃ¢â‚¬â€followed his majesty to the great hall, where a magnificent collation was laid out, and where, without more delay, they all sat down to feast.

Before the banquet was over, the king, charmed with the good qualities of the Marquis of CarabasÃ¢â‚¬â€and likewise with his wine, of which he had drunk six or seven cupsÃ¢â‚¬â€said, bowing across the table at which the princess and the millerÃ¢â‚¬â„¢s son were talking very confidentially together, Ã¢â‚¬Å“It rests with you, Marquis, whether you will not become my son-in-law.Ã¢â‚¬Â

So they were married the very next day, and took possession of the OgreÃ¢â‚¬â„¢s castle, and of everything that had belonged to him.

As for the cat, he became at once a grand personage, and had never more any need to run after mice, except for his own diversion.