Breakfast is essential for our daily life. Everyone need it. But not all of the people knows that there are several types of breakfast.

How do I know? Coz I learned it in college. Hahaha 🙂 Iâ€™ll share it with you. 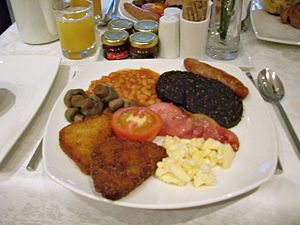 Well actually, there are two kind of American breakfast, but in a cruise ship, the waiter will ask you only one of them. So, Itâ€™s important to know both of them.

A full North American breakfast (Canada and the United States) consists of eggs, a "breakfast meat" such as bacon, ham, or sausage, scrapple, pork roll, spam or even steak or country fried steak; fried potatoes such as hash browns or home fries; toasted white, wheat, rye or some other bread, such as English muffins or bagels; fruit or fruit juice, and tea or, usually, coffee. It is often referred to as a "country breakfast" in many areas of the Midwestern United States. The terms "fry" and "full breakfast" are not generally used in North America, though hotels generally distinguish between a light "continental breakfast" and a hot, cooked breakfast.
In the Southern United States the meal is typically known as a "big breakfast" or "Sunday breakfast" and may add or replace elements of the above with: grits, toast or biscuits with white gravy, pancakes, cinnamon rolls or similar sweet pastries.

Ingredients include ham, sausage or bacon, eggs, much like a full breakfast elsewhere. A distinguishing feature is that fry jacks are also eaten, these being fried pieces of dough, similar to beignets or sopapillas. It can also include items like toast, pancakes, or hashbrowns. Fresh orange juice is often added as a drink. Guatemala’s version of the full breakfast includes fried plantains, tortillas, and refried black beans. In Belize breakfast often features eggs and/or fried meats such as bacon or ham, fry jacks or thick flour tortillas or Johnny Cakes (thick, fluffy homemade biscuits), and fresh local fruit such as mango or melon and tea. Fried beans, smoked, fried or fresh fish are common substitutes for the meat or eggs. Belizeans enjoy their foods highly spiced and will flavor every meal, including breakfast, with recado rojo (achiote paste), pickled habanero peppers or habanero pepper sauce.

Continental breakfast is a meal based on lighter Mediterranean breakfast traditions. It is a light meal meant to satisfy one until lunch. A typical continental breakfast consists of coffee and milk (often mixed as cappuccino or latte) or hot chocolate with a variety of sweet cakes such as waffles/pancakes, brioche and pastries such as croissants, often with a sweet jam, cream, or chocolate filling. It is often served with juice. The continental breakfast may also include sliced cold meats, such as salami or ham, yogurt or cereal. Some countries of Europe, such as the Netherlands and those in Scandinavia, add fruit and cheese to the bread menu and occasionally a boiled egg or a small serving of salami.